A rare snowstorm hit the Tucson area Wednesday, with large and wet flakes falling off and on throughout the afternoon and evening.

All of Tucson got snow, with accumulations of one-half to 1 inch. Oro Valley, Catalina and other areas at higher elevations had up to 2 inches. Mount Lemmon, at 9,000 feet, had 6 inches or more.

At one point, the National Weather Service issued a "blizzard warning" for Arizona mountain ranges, including those around Tucson.

Heavy rain was reported elsewhere; the Phoenix metropolitan area had up to three-quarters of an inch of rain in some areas.

Play was suspended at the Accenture Match Play Championship golf event in Marana.

The weather service issued a blizzard warning until 11 p.m. for the mountains of southeastern Arizona.

More rain was forecast for Thursday from a second, smaller and weaker storm system that was moving from the west. 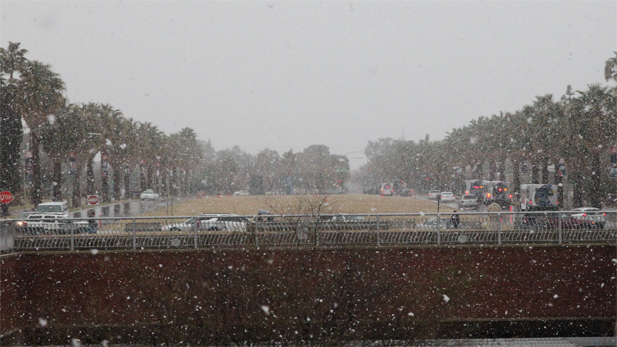 UA Students Shocked, Excited By Snowfall Daily news roundup: No new coronavirus deaths reported by state, impact of census strong in AZ Tucson mayor and City Council approve city budget, leaving police funding nearly flat
By posting comments, you agree to our
AZPM encourages comments, but comments that contain profanity, unrelated information, threats, libel, defamatory statements, obscenities, pornography or that violate the law are not allowed. Comments that promote commercial products or services are not allowed. Comments in violation of this policy will be removed. Continued posting of comments that violate this policy will result in the commenter being banned from the site.