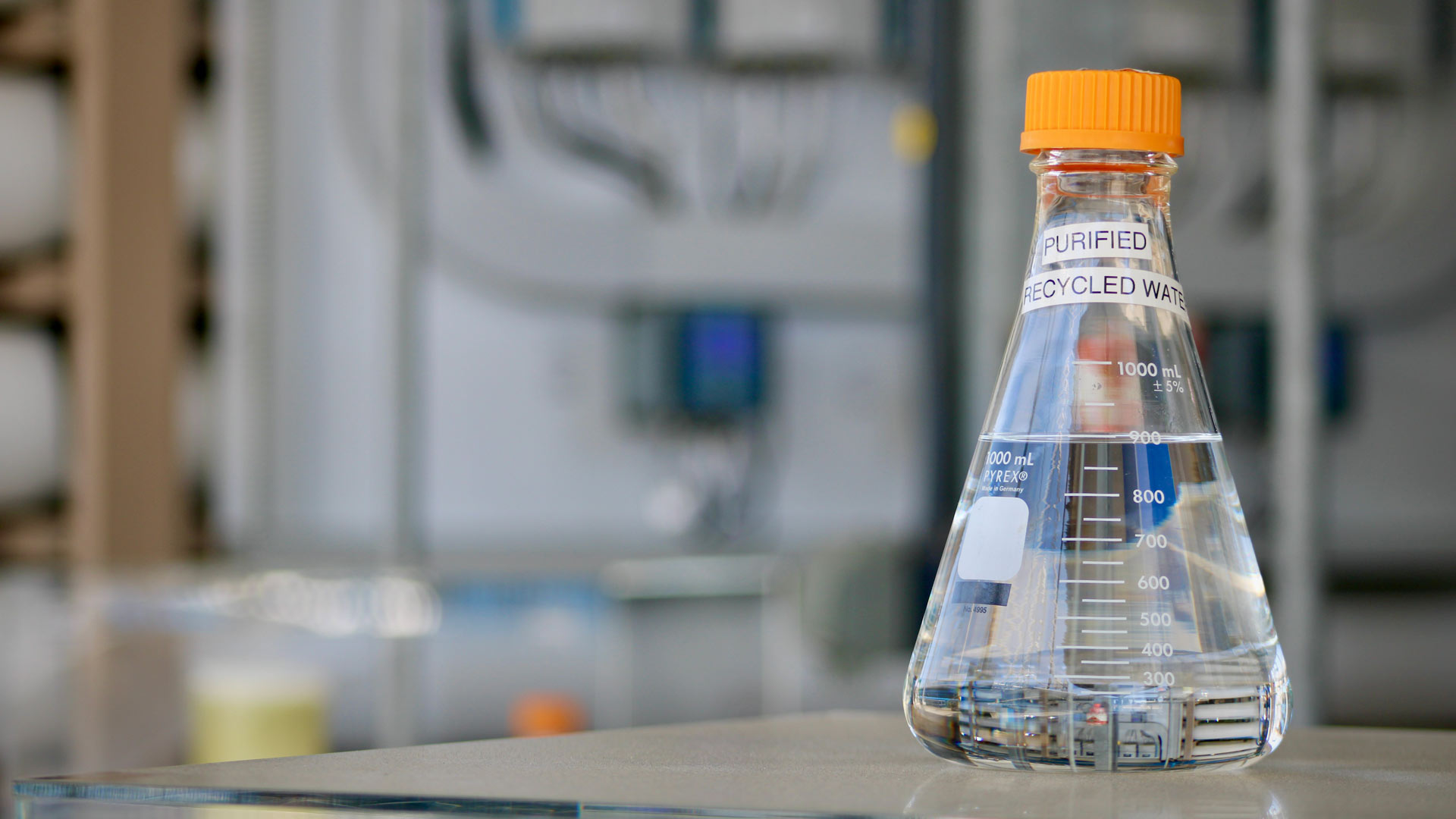 Treated wastewater, like this sample in Carson, California, could soon become a bigger part of the West's water portfolio. Cities in the drought-stricken Colorado River basin are putting big money behind project
Alex Hager, KUNC

In the parched Colorado River basin, water managers are turning over every stone looking for ways to keep the taps flowing. Now, they’re finding more water in some unusual places – shower drains and toilet flushes.

At a sprawling sewage treatment plant in Carson, California, the occasional breeze delivers a pungent whiff of a reminder of how used water becomes “reused.” Here, the Metropolitan Water District of Southern California is planting the seeds for a massive new facility, where a multi-billion-dollar installation could help recycle wastewater and keep the drinking supply flowing for the agency’s 19 million customers.

As climate change makes it increasingly clear that natural forces won’t deliver enough water to turn around a 23-year drought, water managers are looking for ways to stretch out the supply that’s already in the system.

“It's super exciting,” said Rupam Soni, a community relations manager for Metropolitan. “It is going to make a substantial change. It's going to provide a new supply.”

Soni is leading a tour through a demonstration site of the agency’s water recycling technology. A tight-packed network of pipes and pumps – many equipped with high-tech sensors – whirs in the background. She holds up a flask of the final product.

“This water is purified water,” Soni said. “It’s near distilled in quality. It's so pure that we would have to add minerals back into it. And it's really important for the future of our water supply, just as the Colorado River is too.”

This demonstration site is meant to prove that large-scale water recycling will work at the Carson location, and help convince policymakers and the public that the project is worth supporting. It’ll be a costly and drawn-out build, and historically, some have expressed queasiness at the prospect of drinking treated wastewater.

The proposed facility is projected to cost $3.4 billion to build. Once completed, it would cost $129 million to operate each year. Construction timelines project that it could go online in 2032.

Currently, the treatment plant next door cleans more than 200 million gallons of water each day, enough to fill six Costco warehouses. That water is not clean enough to drink but is treated enough to be safely pumped into the ocean, about two miles off the coast. The new facility from Metropolitan aims to redirect up to 150 million gallons back into the municipal supply in and around Los Angeles.

Felicia Marcus, a visiting fellow at Stanford University’s Water in the West Program, is candid about water recycling’s hefty price tag but said the technology is one of the best options for Southern California and water-short cities around the region going forward.

“There's not a lot of con other than it's expensive,” she said. “But it's a smart investment. My view is that it'll be priceless in the future.”

Marcus chaired the California State Water Resources Control Board and served as president of the board of Public Works for the City of Los Angeles. Technological advances and growing public acceptance – including younger generations’ willingness to get past the “yuck factor” – have made it a “cheaper, smarter and faster” solution than methods such as desalination, she said.

As policymakers across the arid West scramble to agree on new ways to divvy up the region’s shrinking water supply, the outlook for water to come back naturally keeps getting bleaker. Climate change is making the Colorado River watershed hotter and drier. That reality, Marcus said, will change the calculus for the future of water use, and raise the costs to deliver clean water to cities.

“The reality we're in now won't exist under climate change,” she said. “So we have to look at the economic cost of not having that water, and having to do massive 30, 40, 50% recycling on the social and economic fabric of major metropolitan areas.”

The majority of the roughly 40 million people who depend on the Colorado River live in major metropolitan areas. Agriculture, however, accounts for the bulk of water use. Farmers and ranchers use nearly 80% of the river’s supply. For that reason, agricultural regions are often targeted in discussions about water cutbacks. Some states are considering programs that would pay farmers to pause growing, freeing up that water for cities and suburbs.

Marcus, drawing on an apocryphal quote from a famous depression-era bank robber, said those programs will work best in tandem with conservation in cities.

“Willie Sutton, when asked why he robbed banks, said that it's because that's where the money is,” Marcus said. “And agriculture, that's where the water is. But in my view, we should lose the lawns first, do our recycling, et cetera, and then work with agriculture to make a transition that doesn't throw our food system or the small communities in disarray.”

As cities weigh the merits of an expensive new treatment process, experts have made at least one thing clear – it’s safe.

David Jassby is an associate professor of civil environmental engineering at UCLA. He explained that treated wastewater already flows through streams and rivers across the country, and pointed to major utilities’ track record of very few water-borne disease outbreaks as a testament to the capacity of treatment technology.

“The level of treatment that wastewater reuse entities use to recycle wastewater is far higher than what we apply to a river or groundwater,” Jassby said. “It's orders of magnitude more intense and extensive.”

Jassby heralded a water reuse program in Orange County, California as an example of the technology’s potential. The county’s Groundwater Replenishment System is the world’s largest wastewater recycling facility, churning out 100 million gallons of drinkable water each day with expansion plans that could increase that total by 30 million.

Other water agencies in the Southwest are signaling their support for Metropolitan’s bet on water reuse technology. If it’s greenlit, a big chunk of funding for the Carson facility would come from outside of southern California, from water agencies whose customers will never even use it. The Southern Nevada Water Authority, the Central Arizona Project, and the Arizona Department of Water resources have all pledged to help fund the reuse project.

Once that new recycling setup is online, southern California will have more water in its own system, and will not need to draw as much from Colorado River reservoirs such as Lake Mead. The water left in the reservoirs will be made available to the partner agencies in Nevada and Arizona.

“If we're able to finalize the agreement and go forward,” said David Johnson, deputy general manager of operations for the Southern Nevada Water Authority, “Then we would not have to build any of that transportation infrastructure to be able to get water from one location to another. So it just makes a lot of sense to us.”

Johnson’s agency is ready to contribute up to $750 million to secure that additional supply from Lake Mead. The deal represents a somewhat rare example of cross-state collaboration in the Colorado River basin. Water managers often preach the need for collaboration, asserting that collective solutions will be the only way out of the region’s collective problem. But recently, opportunities to work together have found them unwilling to sacrifice their own water supplies, even under the threat of federal intervention.

While coming together for a water reuse program doesn’t require the same level of cross-basin compromise as other discussions of sweeping water cutbacks, it still represents a collaborative step forward.

“This specific project will be somewhat of a trailblazer in terms of the exchange mechanisms that'll need to be put in place to actually accomplish it,” said Patrick Dent, assistant general manager of water policy at the Central Arizona Project.

Dent’s agency needs innovative solutions to keep water flowing in central Arizona. It pipes Colorado River water more than 300 miles across the desert, and has been the subject of federally mandated cutbacks that were issued in response to worsening drought. The area’s population has boomed, and even forward-thinking plans to stash excess water and soften the drought’s blow may not be enough to maintain the region’s supply in the long term.

Arizona governor Doug Ducey generated headlines in January when he announced a substantial investment in desalination technology, but a proposed deal to purify seawater in Mexico and trade it for some of that country’s Colorado River water has drawn skepticism from experts. The Central Arizona Project’s willingness to fund an exchange for recycled water seems to signal that it may be a more feasible near-term solution for Arizona’s water woes.

“The costs, while still significant for generating an acre-foot of recycled water, are less than desal generally because of the lower salt content,” Dent said. “So I see a cost advantage and a water supply advantage.”

Water in the Western U.S. is typically measured by the acre-foot, the amount of water needed to fill one acre of land to a height of one foot. One acre-foot generally provides enough water for one to two households for a year.

Realistically, water reuse will not be the silver bullet in any part of the basin. While it can add to the supply, academics and water managers are generally quick to caution that no single innovation or policy will solve the Colorado River’s sweeping drought crisis.

‘It’s getting close’: As the megadrought grinds on, Arizona working to meet water demands The Buzz: A strong monsoon brings road closures and floods The Buzz: Dealing with Arizona's PFAS problem
By posting comments, you agree to our
AZPM encourages comments, but comments that contain profanity, unrelated information, threats, libel, defamatory statements, obscenities, pornography or that violate the law are not allowed. Comments that promote commercial products or services are not allowed. Comments in violation of this policy will be removed. Continued posting of comments that violate this policy will result in the commenter being banned from the site.