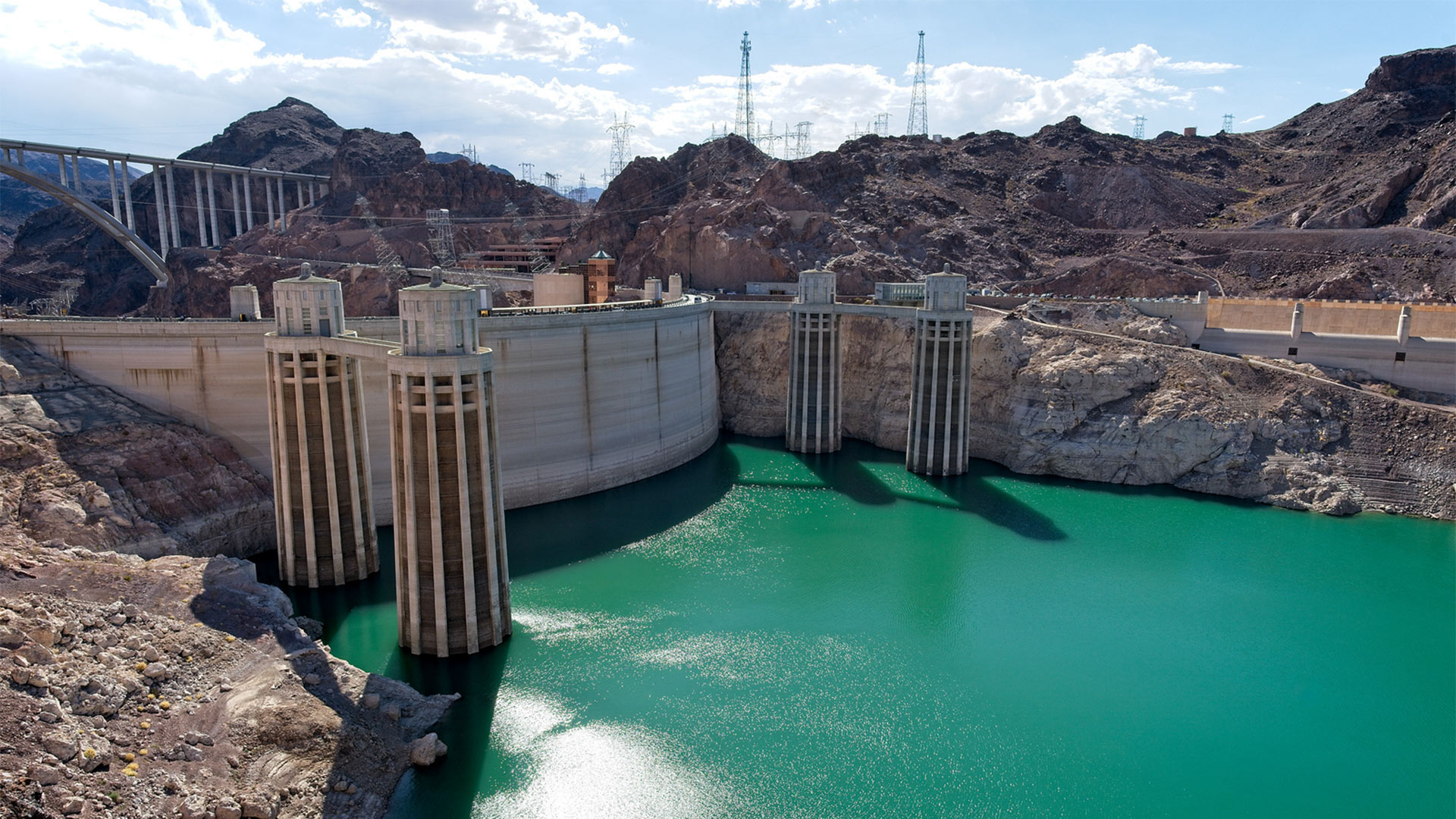 The seven states in the Colorado River basin couldn't agree on a plan to conserve unprecedented amounts of water before a federal deadline. Meanwhile, grim projections for the future of water levels in Lake Mead have forced mandatory cuts to water for some users in the lower basin. Federal authorities are trying to prop up levels in the nation's largest reservoir before they dip too low to generate hydropower or allow the passage of water.
Tom Yulsman, The Water Desk

States in the Colorado River Basin have failed to meet a federal deadline to conserve an unprecedented amount of water. The lack of consensus on how to wean off the river’s dwindling supply puts the water source for 40 million in the Southwest in jeopardy.

In June, federal officials said the seven Western states that rely on the river needed to cut their water use by a tremendous amount — 2 to 4 million acre-feet — and they threatened to take action if the states couldn’t agree. Bureau of Reclamation commissioner Camille Calimlim Touton gave the states 60 days to commit to new conservation measures.

The deadline has now passed and there’s no deal.

Despite the states’ failure, some users on the river will see their supplies tightened in 2023. An August forecast for water levels at Lakes Mead and Powell, the nation’s two largest reservoirs, triggered additional cutbacks to Arizona, Nevada, and Mexico. Those cuts were first implemented last year and will run deeper in 2023. The reductions were previously laid out in the 2019 and 2007 agreements. In 2023, Arizona will have to reduce its reliance on the Colorado River by 21%, Nevada by 8%, and Mexico by 7%.

Now that a watershed-wide plan has failed to coalesce, it’s unclear what repercussions federal officials have in store for the seven U.S. states that rely on it -- Colorado, Wyoming, New Mexico, Utah, California, Arizona, and Nevada.

In a press conference Tuesday, federal officials said they would begin new administrative processes to further study how water might be used more efficiently in the basin, and how an additional $4 billion in the recently signed Inflation Reduction Act might be put to use. They also said they will initiate studies to see how feasible it is to pass water through Glen Canyon Dam when its level drops below the intakes for its hydropower facility.

“Without prompt responsive actions and investments now, the Colorado River and the citizens that rely on it will face a future of uncertainty and conflict,” said Tanya Trujillo, assistant secretary for water and science at the Interior Department.

The level of conservation the Bureau of Reclamation identified as necessary came from an analysis of what it would take to stabilize water levels at Lakes Mead and Powell. Without further commitments, the federal agency says both reservoirs are at risk of dropping to levels where hydropower production ceases, and it becomes physically impossible to move water downstream through existing infrastructure.

The Bureau of Reclamation releases a new “24-month study” each month, projecting the next two years of water levels in Lakes Mead and Powell. When the forecast shows levels are likely to dip below a certain threshold, the Bureau issues water cutbacks that were agreed upon in the 2019 Drought Contingency Plan and the 2007 Interim Guidelines.

That’s exactly what happened Tuesday. The latest study forecasted that water levels in Lake Mead will drop just under 1,048 feet in January 2023. That’s below the threshold of 1,050 feet, triggering “Level 2a shortage conditions.” That means less water will be released to Arizona, Nevada, and Mexico.

While the basin is projected to reach that level for the first time ever, it’s the second year in a row that restrictions of some kind were issued. Last August, the Bureau of Reclamation implemented similar cuts.

The 2023 cuts are a relatively small step up from the first round. Even Arizona, which is losing the largest share of water by a wide margin, will see cuts of 592,000 acre-feet. That’s only 80,000 more than the state’s existing cutbacks. In total, the two states and Mexico will see 108,000 acre-feet less than the previous year. That’s only a fraction of the size of other recent water conservation measures, including a notable agreement in which three lower basin states agreed to set aside 500,000 acre-feet to prop up Lake Mead.

Environmental groups say those cuts are inadequate in the face of the basin’s worsening supply-demand imbalance. “The 2a cuts alone are not going to be enough,” said Kyle Roerink, director of the Great Basin Water Network. “If we don't get an all-hands-on-deck effort right now, we're just going to be realigning the deck chairs on sinking houseboats at Lake Mead and Powell, where it's completely deficient and not tenable.” Cuts are likely to be felt most sharply in central Arizona, but water agencies in that area are pulling from their reserves to soften the blow. Cities, especially, have invested in water storage and conservation programs to keep taps flowing uninterrupted. In Tucson, for example, the city banks about a third of its water each year in an underground aquifer.

Water managers say restrictions to Arizona’s municipal supplies could start in as few as five years, but residents probably wouldn’t see the effects for even longer because of those storage efforts.

While past agreements provided some certainty about near-term conservation measures, future federal actions were left uncertain. Some water districts saw the government’s announcement as a deadline extension to keep working on a regional solution.

“We appreciate [Commissioner Touton’s] support today in giving us a limited extension to meet the goal and to provide resources to help us implement a plan,” said Adel Hagekhalil, general manager for the Metropolitan Water District of Southern California. “We also understand that if we don’t succeed, Reclamation will implement its own approach to stabilize Lake Mead and Lake Powell.”

Since June talks among the basin states have exacerbated longstanding tensions. Leaders in the Upper Basin states of Colorado, Wyoming, Utah, and New Mexico, called on those downstream in Arizona, California, and Nevada to pony up firm commitments first. In a five-point plan, Upper Basin leaders’ wish list included the reauthorization of a voluntary conservation program that pays farmers to use less water and send it downstream.

“However, this plan is ineffective without action in the Lower Basin,” said Colorado Water Conservation Board director, Becky Mitchell. “Downstream of Lake Mead and Lake Powell, depletions must come into balance with available supply.”

Publicly, the region’s water managers often extoll the value and necessity of collaboration, hinting at a desire to find a collective solution to the collective problem. Roerink says the stalled talks and finger-pointing go against that spirit and open the door for federal intervention.

“We always hear about these notions of everybody singing Kumbaya, and the collaboration is so wonderful and so great. How many times have we heard that?” Roerink said. “But really, what's happening is they're sharpening their knives. We're getting ready to potentially see legislation that could change the game, potentially litigation that could change the game.” Meetings among those Lower Basin states were heated from the start, as fingers pointed toward California’s sizable water budget as a place to find the volumes the federal government demanded.

Amid the tension between the states, some tribes in the Colorado River basin said they weren’t being adequately represented in talks about conservation. A group of 14 tribes sent a letter to the Department of the Interior asking for a seat at the table. The basin includes 30 federally-recognized Indian tribes, which collectively hold the rights to about a quarter of the Colorado River’s flow, but often lack the funding and infrastructure to use their full allocations.

“What is being discussed behind closed doors among the United States and the Basin States will likely have a direct impact on Basin Tribes’ water rights and other resources, and we expect and demand that you protect our interests,” their letter reads.

This story is part of ongoing coverage of the Colorado River, produced by KUNC, and supported by the Walton Family Foundation.

Tucson keeps same water order despite drought Tucson Water plans for future The Buzz: A strong monsoon brings road closures and floods
By posting comments, you agree to our
AZPM encourages comments, but comments that contain profanity, unrelated information, threats, libel, defamatory statements, obscenities, pornography or that violate the law are not allowed. Comments that promote commercial products or services are not allowed. Comments in violation of this policy will be removed. Continued posting of comments that violate this policy will result in the commenter being banned from the site.