Sonoran desert tortoises can hold water for up to a year, Rubke said. That matters given that Arizona is in a megadrought. by Olivia Dow, Cronkite News Tweet 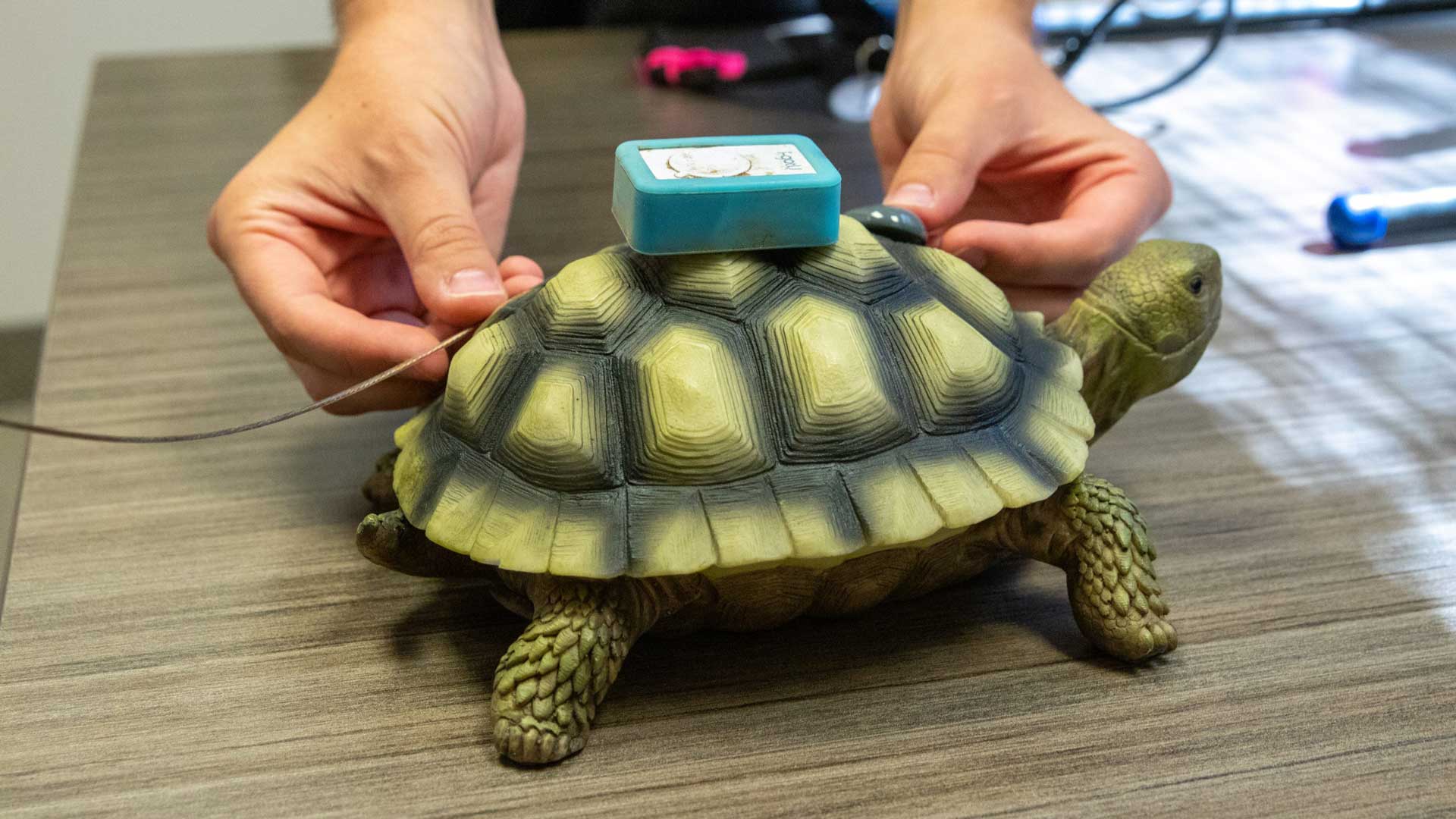 Jessie Dwyer, biodiversity manager at McDowell Sonoran Conservancy, demonstrates how a transmitter and GPS tracker are affixed to the wild tortoises in the study. Photo taken Sept. 30, 2022, in Scottsdale.
Photo by Emily Mai,Cronkite News

Sonoran desert tortoises are built for the desert. With their short legs and tough shell, they slowly but skillfully traverse Arizona’s rocky terrain, and like goats, can get to places humans cannot. And in our increasingly dry and hot climate, they just might have lessons about survival.

“If there’s anything that’s built for long-term drought, it’s the Sonoran desert tortoise,” Chad Rubke with the Arizona Game & Fish Department said. “These guys are like little tanks of the Sonoran Desert.”

Sonoran desert tortoises can hold water for up to a year, Rubke said. That matters given that Arizona is in a megadrought.

“They hold all their water resources within their bladder; they have a really big bladder,” Rubke said. “That makes up a large portion of their body weight, and they get a lot of their moisture from the food that they eat.”

The tortoises, unsurprisingly, are not fleet of foot, traveling 10 to 12 miles over a few years, Rubke said.

One of the ways researchers are able to monitor tortoise movement is through radio telemetry, Rubke said. He knows this because Arizona Game & Fish has monitored and tracked Sonoran desert tortoises since the 1980s.

The McDowell Sonoran Conservancy now is doing its own study using technology to track Sonoran desert tortoises to answer such questions as how urban expansion affects the species. The conservancy manages the 30,500-acre McDowell Sonoran Preserve, which is owned by Scottsdale.

Rubke said he helped get the conservancy’s three-year study up and running but has mostly been on the project’s periphery.

The conservancy started the study in 2021, using telemetry devices that tracked the tortoises’ location once a week. This year, it added GPS units to collect location data every hour.

“We’re going out there every three weeks to swap out the GPS unit on the tortoise (so) that we can get that data back,” said Jessie Dwyer, the biodiversity manager at the conservancy. “We will use the telemetry equipment to actually track the location of the tortoise and then we get that data from the GPS for their fine-scale movements.”

The conservancy attaches transmitters to the shells of 22 tortoises across the preserve, Dwyer said. The study is possible through special permits from Scottsdale and Arizona Game & Fish.

Researchers hope to get an idea of how human factors affect the tortoises.

“That’s an area we are keeping a big eye on and we have a few tortoises that we’ve tracked in that area,” Dwyer said. “They do interact with humans on a frequent basis. These tortoises live a very long time, so they might have a typical route they usually go through and then all of a sudden there is construction there one year.”

Although the study will continue for another year, Dwyer said they have learned the preserve’s tortoise population is almost “cut in half” by Rio Verde Drive, which separates the preserve.

Dwyer said they have not observed tortoises moving across Rio Verde Drive, so two populations exist, one on the north and the other on the south. They said that this, “may be impactful in the future where those kind of populations of tortoises are cut off from each other, and how that might affect them genetically.”

So far, they have found that each tortoise is individual in its movements, some travel a lot while others do not travel as much. Dwyer said they have also found the tortoises are “variable” in the way they use the landscape. Some have more complicated rock burrows and others dig shallow burrows.

“One of the cool things that we’ve seen with this study is we’ve seen a lot of juveniles lately, and also some tortoise eggs as well, which is a really good sign of a healthy tortoise population,” Dwyer said.

Sonoran desert tortoises are a keystone species in the Sonoran desert, meaning they are an important factor for the overall ecosystem. However, Dwyer said, the tortoise is easily affected by human disturbances.

“We’ve seen it with the kind of sister subspecies of Mojave desert tortoise with a lot of urban development has really been detrimental to the species,” Dwyer said. “Any sort of development or human recreation but also climate change as well.”

In February, the U.S. Fish and Wildlife Service denied endangered species protection to the Sonoran desert tortoise, citing the species has adult populations in the hundreds of thousands currently in the wild.

Krista Kemppinen, senior scientist at the Center for Biological Diversity in Tucson, said while Sonoran desert tortoise populations are relatively stable, there is concern for the future.

“The big concern is as droughts get more frequent and more intense, that there will be declines in the future,” Kemppinen said.

Kemppinen said Sonoran desert tortoises are “in tune” with the desert environment, feeding on vegetation from monsoon rains, but habitat loss, cattle grazing, and invasive plant species, she said, could harm their ability to thrive in the desert.

“Biodiversity in general… is just so essential to maintaining ecosystem function and through that, delivery of ecosystem services,” Kemppinen said. If a species has a drastic decline, she said, it can impact the entire ecosystem. “And by the time that it’s declined so significantly, it may even be too late for us to recover it. So we do really need a diverse and stable ecosystem to provide a series of benefits to society.”

Updated recovery plan for Mexican wolves aims to reduce human-caused deaths Yoga for addiction recovery and mental health expands among care providers UArizona Health Sciences receives grant to study PFAS mitigation in firefighters' blood
By posting comments, you agree to our
AZPM encourages comments, but comments that contain profanity, unrelated information, threats, libel, defamatory statements, obscenities, pornography or that violate the law are not allowed. Comments that promote commercial products or services are not allowed. Comments in violation of this policy will be removed. Continued posting of comments that violate this policy will result in the commenter being banned from the site.