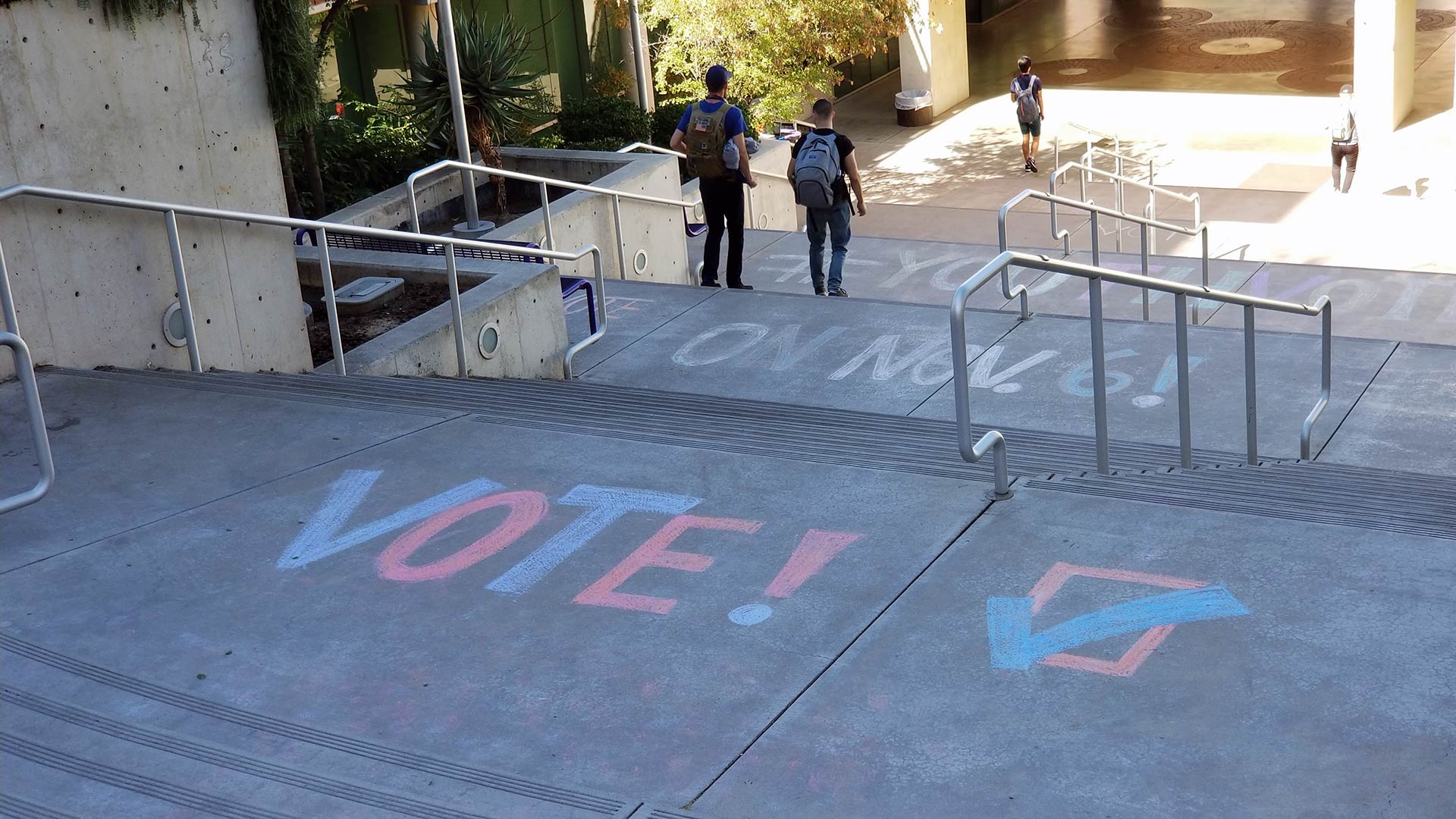 Chalk art on the stairs heading to the Integrated Learning Center on the University of Arizona campus encourages young people to vote in the upcoming election.
AZPM

Arizonans had many decisions on this year's ballot.

Voters decided to approve Proposition 125, dealing with pensions, according to unofficial, early results.

Proposition 126 prevents the Legislature, or any local government, from imposing a tax on a service-based industry such as haircuts, child care, or real estate transactions. The proposal also prevents an increase of any existing service tax. The idea was placed on the ballot through the citizen's initiative process and the efforts of the Arizona Association of Realtors.

Voters rejected an effort increase renewable energy across the state, some citing an expectation that it would result in an unfair cost on consumers.

Most states have some renewable energy portfolio standard. One of the highest-profile ballot issues this year, Proposition 127 would have amended the state constitution and required energy utilities, including Tucson Electric Power, to get half of their power from renewable sources like wind and solar by the year 2030.

Proposition 305, which asked whether Arizonans were ready to expand school vouchers, was rejected by state voters.

Last year, the state Legislature passed a bill to expand empowerment scholarship accounts, which are essentially vouchers for private schools. Originally created for Native American students, military families, and students with disabilities, last year's bill signed by the governor expanded the vouchers to be available to any student.

Arizonans collected signatures and forced a referendum on the bill signed by the governor, leading to Proposition 305. Opponents argue expanding the voucher program further diverts needed funding from public schools. Proponents say it gives more choice to other students.

Voters approved a measure limiting the authority of the state commission that gives public finance to candidates, simultaneously awarding the governor more oversight over the commssion

Proposition 306 changes the Citizens Clean Elections Commission, an independent, nonpartisan oversight board created by voters. The commission provides public funding for qualifying candidates and enforces campaign finance laws. Before the passage of Prop. 306, the commission was independent, meaning it did not answer to the governor or Legislature.

Prop. 306, proposed by the state Legislature, now prohibits candidates from transferring public funds to a political party or organization and puts the commission's rulemaking under the authority of a council appointed by the governor.

Races for Pima County recorder and Santa Cruz County sheriff Congressional veteran hopes for another term Race underway for Corporation Commission, Arizona's 'fourth branch of government'
By posting comments, you agree to our
AZPM encourages comments, but comments that contain profanity, unrelated information, threats, libel, defamatory statements, obscenities, pornography or that violate the law are not allowed. Comments that promote commercial products or services are not allowed. Comments in violation of this policy will be removed. Continued posting of comments that violate this policy will result in the commenter being banned from the site.